For the last three weeks, officers have been patrolling the roads in a lorry to target what they call the “fatal four” motoring offences: using a mobile, drink or drug driving, speeding and not wearing a seatbelt.

The unmarked HGV gives cops a better vantage point to see motorists texting at the wheel or watching movies on their mobiles. Equipped with flashing lights, the white lorry has been instrumental in catching out other dangerous drivers as part of Operation Allied Wolf, code-name of a road policing operation across Devon and Cornwall. 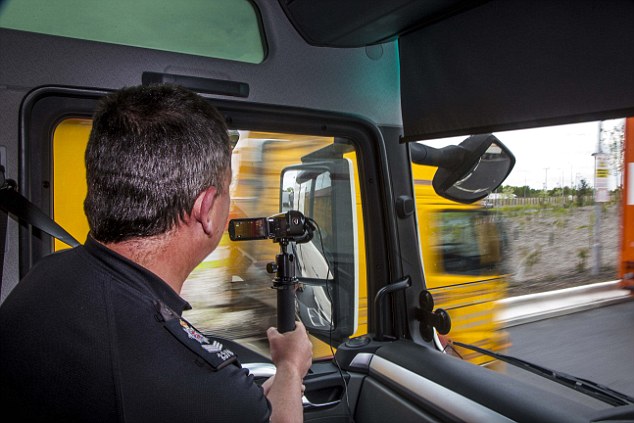 “With Bluetooth in cars people aren’t using mobile phones up to their ear as much as they used to, but we know that people use it to stream videos and check social media activity and to even update social media while they’re driving.

Chief Inspector Leisk said: “Operation Allied Wolf has proved itself to be a very effective tool for improving road safety and also for providing an excellent opportunity to educate road users about unacceptable driving behaviours. We urge the public to play their part in keeping our roads safe by driving within the speed limit, always ensuring they are fit to drive, wearing seat belts and not being distracted when driving.”

Using a hand-held mobile while driving has been illegal for a decade and is subject to three penalty points and a £100 fine, rising to a possible £1,000 on conviction in court. But Government figures show the number of accidents in which mobile phones and texting have been contributory factors has soared by 21% in only three years.

Drivers must understand that if their judgement is impaired because of these factors, then being “under the limit” will not prevent them from being arrested and possibly prosecuted.

Apart from the fatal-four offences mentioned the undercover lorry has even caught a fellow lorry driver cooking a meal on a hob in his cab.

Get your goods to its destination in a safe and timely manner.
www.expresstransport.biz
We #transport all over #Europe. Our pricing is straightforward. No hidden costs or #fuel surcharges. We are available 24/7.
Call us now at +44(0)345 686 8722 or request your SAME DAY QUOTE.

Are you and your vehicle prepared for the Winter months?

Road freight on the threshold of ‘systemic change’

Groupage, an option for transporting your goods

We are your time-critical European transport company, providing express transportation, freight forwarding, groupage, and specialised transportation services to the UK and Europe.

Are you and your vehicle prepared for the Winter months?